I spent a few hours at the Street Eats Food Festival organised by Halal Gems over the weekend. This was the first foodie event I’d been to, so I did a lot of googling before hand on what to expect, price wise etc so I’d be fully prepared – I also wanted to post about it so I can share the different foods I had and the overall experience with you guys.

A lot of the vendors who were there today have restaurants based all over London so it may even give you guys some new places to try!

The festival ran over two days: Friday and Saturday from 11am to 9:30pm, at Old Spitalfields Market. If you couldn’t make it this time, definitely keep an eye out for future events or even next years festival. It was a free entry event, but just required an online registration, which then gives you an e-ticket. Although it didn’t seem to be a requirement as noone really checked these.

There was quite a diverse line up of food, both sweet and savoury, but as you can imagine the lines were massive. I would suggest choosing what stalls you’d like to visit in advance, and planning your visit around those.

In the end, due to some of the lines being ridiculously long, we decided to visit Stacked Dutch Pancakes first as it was the least crowded at the time. We went for the hot nutella and powdered sugar as our topping and it tasted great. A huge plus being they were freshly cooked! I’ve tried dutch pancakes at My Old Dutch pancake house before and they came slightly cold which ruined my experience there, these however were way better.

Next, we wanted something savoury and we both opted on the Samosa Chaat from Chaatit – a company based on delivering ‘finger licking’ Indian street food. The literal translation in hindi means to ‘lick it’, and while the chaat was quite dear at £7 for one portion, it was very tasty. It consists of chickpeas, crushed samosa, red onions, yoghurt and tamarind sauce and it’s one of my favourite dishes. There’s different spice levels and being fans of spicy food and having finely honed Indian tastebuds, we went for the hottest option – no joke, it had our mouths burning but totally worth it! I definitely think the portion should have been bigger for the price however, that was my only issue with it. 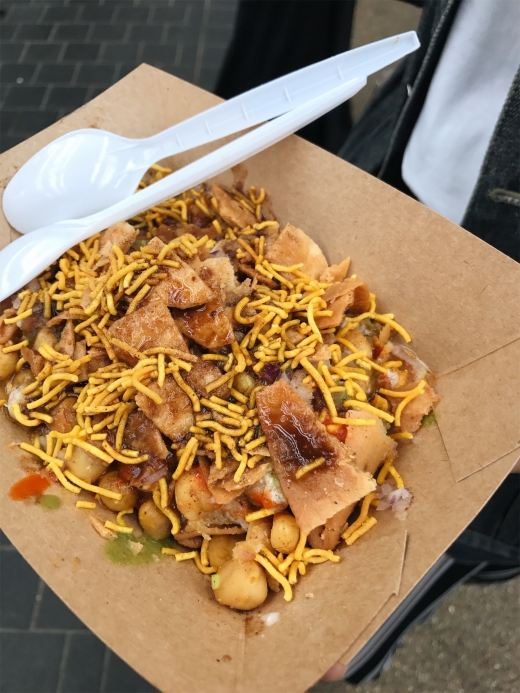 Lastly, we thought we’d end on a sweet note and get some Churros from Churros Garcia. The serving was pretty generous and was definitely the right amount to be shared, I don’t know how some people had a whole cup on their own! The Churros came dusted with sugar and cinnamon, with a small pot of hot chocolate. The chocolate was quite bitter, I would have liked it to be a tad sweeter but overall I quite liked the churros.

Was it worth a visit?

I think as my first foodie event, it gave me a good idea on what food festivals are like and what to expect with future ones. I don’t think it was necessarily the greatest organisation when it came to the online registration and tickets, I think the turnout was way more than expected which led to food running out and space to sit or stand extremely limited. If the next one is also free entry, I think a bigger venue would be better.

The queues were very long, and they weren’t really monitored so people were jumping the line at times which left some people very frustrated. I think it definitely requires a lot of patience! There’s a few stalls I wanted to visit but couldn’t because of the sheer amount of people so that was a shame.

The prices were pretty high so definitely come prepared with cash or change. My friend and I shared our food so it worked out to be around £8 we paid each which is decent for the food we bought. Going out to a restaurant would have been considerably more so for street food this seemed reasonable. If you’re buying portions for yourself though, may work out more expensive so keep that in mind.

Overall, I’m not sure whether I would go again, as I felt like the hype didn’t live up to the reality, however if I did go again, I’d definitely arrive even earlier – I got there around half 1 and it was very busy – and decide beforehand on what I wanted!

Have you been to a food festival before? if so, how was your experience?

Follow Rums the Reader on WordPress.com
Join 927 other subscribers