I was in Waterstones the other day and while I was originally going to buy A storm of swords, something made me pick up a copy of Into the Water instead. I read The Girl on the Train a while back and really enjoyed it, the mystery and thriller aspect really appealed to me. I have to say Into the Water was a good follow up although it’s very different in many ways. I also managed to get a signed copy of the novel, which was pretty cool.

Processed with VSCOcam with a6 preset 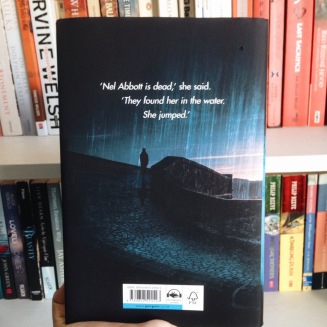 Plot Overview: The novel is set in a small English town, with a host of characters who have history and ties with each other running back many years. The town is home to the Beckford Drowning Pool, a mysterious and sinister place which many women have died at, whether this be by suicide or on suspicion of witchcraft, back in 1679. The plot begins with the suspicious death of Danielle ‘Nel’ Abbott, a photographer and writer who had an avid, if not obsessive interest in the history of the pool and what really happened to these women. Nels estranged younger sister Julia or Jules as she prefers to be called, is summoned to Beckford in order to care for Lena, her 15 year old niece and get her sisters affairs in order.

Throughout the novel we uncover all the characters complex stories and histories, with the town itself and each other. No one is innocent and every one has something to hide, I particularly liked the slightly eery / paranormal spin to the story and it’s something which you don’t normally find in a crime or thriller book so was a unique point.

Hawkins uses the same narrative device, as in Girl on the Train by switching POV’s which keeps the story fresh and certainly kept me interested. While I didn’t have one favourite character, I really empathised for Jules, she is a flawed and sometimes unreliable narrator but she’s been through a lot of terrible situations and you see her find her strength as the novel progresses. I found her more relatable personally than Rachel Watson, the lead female narrator in The Girl on the train.

I appreciate what Hawkins does within this book, interlocking exploration of female characters and addressing current topics like rape culture, domestic violence as well as inappropriate relationships. The relationships between men and women are never one dimensional and you see the way they shift and change over time, a once happy couple become fractured after loss of their daughter for example.

It was an ambitious and clever way in which Hawkins ties the mystery up and it satisfied me. I’m not sure everyone will feel this way, some readers may find it frustrating but for me it made sense and it was poetic. This is not to say that the novel is perfect, there are points where you have to suspend your belief and wilfully ignore the jumps but I for one, really enjoyed Into the Water and I read it in a day and a half as I was so gripped.

Let me know if you’ve read Into the Water or if you’re planning to! Would love to hear your thoughts (:

5 thoughts on “Into the Water by Paula Hawkins”